Single means once!
SAMED supports the SAHPRA communication on reprocessing of single-use devices. Medical devices marked as single-use may not be reprocessed or re-used. This presents a serious risk to patients, as it may make a product less safe and less effective than the product provided by the original manufacturer. Single-use devices often have characteristics that make them extremely difficult to clean and desterilise effectively, allowing biological contaminants to find their way into another patient.

SAMED encourages healthcare practitioners and others who are aware of such activities to report the practice to SAHPRA as a contravention of the Medical Device Regulations.

D-day for Medical Device Establishment License
As is known by most of our members, and some of the other MedTech companies, no medical device may be manufactured, distributed, imported, exported or sold without a valid SAHPRA license. Until now, medical device suppliers were able to operate on the basis of a letter from SAHPRA acknowledging that the company had submitted its application.

But this comes to an end on 17 April 2020 (after a two-week extension of the original deadline on 31 March), and so, SAMED has taken proactive steps to inform all medical device suppliers of this deadline. Going forward, all Medical Technology suppliers must obtain a valid Medical Device Establishment License from SAHPRA.

The association also offered support through its regulatory forums to assist all medical device companies, regardless of whether they are SAMED members or not, to meet regulatory requirements and obtain their establishment licenses.

We appreciate the members’ attention to regulations and wish your companies much business success. 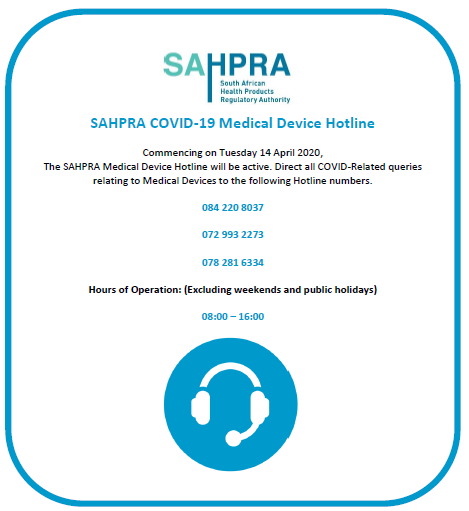